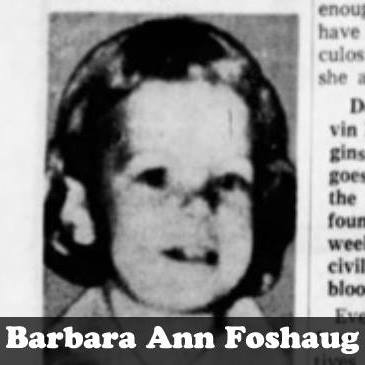 Disappearance: In the area of 17th St. and 4th Ave., Minneapolis, MN.

Barbara Ann Foshaug (4) and her playmate Melissa Ann Lee (5) disappeared in the early evening hours while wandering unsupervised. Their remains were discovered ten miles away in Plymouth, MN.

Barbara Ann Foshaug (4) and Melissa Ann Lee (5) were abducted sometime in the early evening hours of September 7th, 1963. They were last seen alive walking out of a laundromat not far from where they lived. Newspapers widely reported that the girls, according to ‘sole witness’ Virginia Engen (5), were taken by a man luring them into his car with candy. This was dismissed as a lie by law enforcement, finding that Viriginia had been confined to her room until 7pm that evening, well after Barbara and Melissa had disappeared. However, many details of her story align with reports of a man giving kids around the neighborhood candy and money. This man was identified as Denny Bryant (below), who lied about being a member of a local seminary.

The girls were reported missing at approximately 7:30pm and again at 9:00pm by Melissa’s mother, Ann Leverett (23).

Prior to that, the girls were seen at a laundromat with another girl at approximately 6:30pm. The attendant, Ernie Nelson, stated that the girls had stopped into the laundromat, which was common for neighborhood kids at the time. The kids then proceeded past the laundromat. Roughly ten minutes later, he said, “the children’s parents came looking for them.”

50 volunteers from the Citizens’ Band Radio group joined Minneapolis police squads in the search the very same night. Bloodhounds were brought in the next day, and a careful sweep of the neighborhood commenced. Detective Inspector Calvin Hawkinson asked city residents to search any abandoned cars, refrigerators, and nearby buildings as Police Chief Pat Walling headed up a 42-block search for the missing girls.

On October 1st, 1963, the bodies of Barbara and Melissa were discovered ten miles west of Minneapolis by a Plymouth, MN Street Department employee by the name of Jesse Theis while he was trimming grass along the side of the road across from Mission Farms, a facility for recovering alcoholics. They were lying next to each other under an elm tree. According to the police report, he left the roadside area to relieve himself when he came across the remains.

The bodies were in an advanced state of decay. A coroner could not determine a cause of death due to so much tissue loss. A white powder substance found around the girls’ bodies tested positive for hydrochloride salt, a byproduct of hydrochloric acid coming into contact with an organic base. Melvin G. Leverett, stepfather of Melissa, was brought to the scene to identify the clothing found on the scene. The detective who brought him to the scene described him as being emotionless save for turning pale and acting nervous when he saw the bodies. After confirming the clothing worn by the girls, he and his wife Ann Leverett (23) were taken to the police station for questioning.

It was later determined that Melvin Leverett had been in possession of a bottle of hydrochloric acid, which was discovered in their apartment by police after the family had moved out of state. Melvin was eventually dropped as a suspect.

Melvin G. Leverett – For months afterward, Melissa’s stepfather Melvin Leverett was long considered a suspect in the slayings. Grim emotionless, he participated in house-to-house searches canvassing the neighborhood but neighbors stated that he abused his step-daughter Melissa on several occasions. He was given a lie detector test, but subsequently never faced prosecution. Nine months after the bodies of the girls were found, Melvin led police on a high-speed chase after which he faced 16 traffic violations. Part of the original lead that police officers followed had been that of Virginia Engen’s statement that she heard Melissa scream for her mom and dad, and that Barbara followed willingly. However, this was also dismissed as a false statement. Melvin Leverett was known to have violent tendencies, having severely beaten his daughter Melissa leaving her covered with bruises and welts, and also the subject of formal complaints against him regarding breach of peace and assault. This was corroborated by several witnesses in the police report.

Denny Bryant – Dennis ‘Denny’ Bryant is the man pointed out by many to have been handing out candy to kids in the neighborhood and hanging around in play areas. Police spoke to a taxi driver named Marvin Wayman, who said he noticed the man talking to his daughter approximately ten days earlier. “He said he just likes kids and left,” Wayman said. (Star Tribune September 9th, 1963.) He was also seen by several neighbors, who said he wore a black suit with a white shirt and tie with silver rimmed glasses, roughly 25 years old, medium build, and dark hair combed back with a wave in front. He told at least two other neighbors that he was affiliated with St. Paul Seminary, giving his name as Bryan or Bryant. Police found no one with that name belonging to a seminary in the area. Wayman talked to the man the Saturday Barbara and Melissa went missing. “He said people in the neighborhood were suspicious because he had been giving candy to the children and he wanted to apologize.” (Star Tribune, September 9th, 1963). He was later ruled out as a suspect.

Wayne LeRoy Waukazo – Ten years after Barbara and Melissa were found, police arrested 28-year-old Wayne LeRoy Waukazo. He was indicted for the murders of Linda Sue Kuehl, 13, and her sister Pamela, 18. Now indicted on four counts of murder, he was brought to trial and convicted in the deaths of Linda and Pamela Kuehl. Throughout the trial he vehemently denied involvement with the deaths of Barbara and Melissa, and charges were dismissed with no evidence linking him to the killings. He was not an original suspect in the case.

Barbara’s family has been advised to obtain police reports in the case. If you or someone you know lived in this area at the time of the case, please contact us at [email protected]